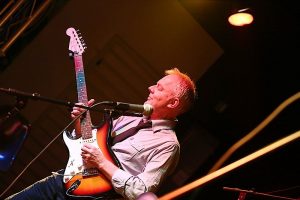 Danish guitar-virtuoso and local hero, Uffe Steen, is slowly but surely making his presence felt on the
internet with his absolutely breathtaking chops and imaginative playing.
As a lefty, growing up with only a right hand guitar around, Steen wasted no time – he just flipped it and
got busy playing upside down. By the time he learned that the strings were supposed to go the other way,
he was already neck-deep in developing his own style. This pragmatic approach to the instrument might be
part of what makes his playing so unique.
As a young man, Steen actually studied the clarinet, not the guitar, at the Royal Academy of Music in
Denmark.
Luckily for us, he chose to devote his attention to the guitar after finishing his studies. Though he sees
himself as a musician first, Steen has taught guitar at the Royal Academy since 1982, where he is also an
associate professor. He has authored several instructional books for the guitar on blues and jazz playing.
It’s difficult to describe Steen’s playing style. It has the same feel as when David Gilmour plays, where
nothing ever sounds rushed or difficult. His bends are wide and clear with an almost vocal-like phrasing a
bit like the great Albert King. Even with those great masters in mind, Steen still doesn’t really sound like
anybody else and no one else sounds quite like him – a hallmark of the truly great musicians.
He uses different edges of the pick, picks in different positions along the pickups, and switches from pick to
fingers for a plethora of tones. By using his volume and tone controls, he gets a wealth of dynamics and
tones from his simple guitar-into-an-amp setup.
At the same time, Steen keeps impeccable timing, comping away in the background until it’s his time to
shine. Sometimes he’ll even make up musical comments to a song on the spot. Like making the guitar cluck
like a hen. Not just chicken picking – the actual way a chicken sounds!
With a busy touring schedule, Steen’s approach to playing is that it has to be fun. That’s why he keeps
challenging himself by learning new material and new ways to play. His tireless work ethic and will to
explore different genres has meant that Steen has evaded the pitfalls of falling into habits and staying in
the comfort zone.
Since he started performing in 1966, he has fronted several jazz ensembles but also served as sideman
extraordinaire, lending his skills to different artists in a wide range of genres from folk to jazz and blues.
With four solo records under his belt and over 70 album appearances since he started recording in the early
seventies, Steen is a veteran with a distinguished recording career. His last record, Twangs, from 2011 was
an eclectic mix of jazz, country, americana and blues, showcasing his mastery of the guitar and deep
knowledge of the genres.
With his online following steadily increasing on his YouTube channel where he regularly uploads original
compositions as well as solo interpretations of classic pieces.